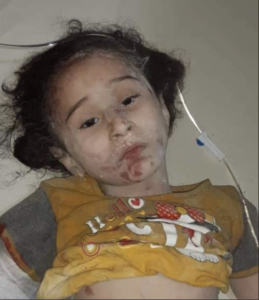 There is nothing we can say to this little girl who survived Russian barrel bombing of Maarat al-Numan, Idlib that will comfort her or make her whole again. Can we say it’s not our fault that there was no antiwar movement to stand with the Syrian Arab Spring? Will it lessen her trauma & losses if we tell her we will rebuild a principled antiwar movement? Will she find it in her heart to forgive the dictatorship, its military allies, propagandists & guppies who called her a ‘Salafi-jihadi terrorist’? Or to forgive those of us who tried but failed to build a movement opposing the bombing of civilians by Syria, Russia, & the US-coalition including Israel?

Idlib is a watershed moment in human history, especially in antiwar history. It is part of our times that Islamophobic ‘war on terror’ ideology was adopted by the leading figures of the left like Tariq Ali & Chomsky & most of the antiwar & socialist movements, making them in league & indistinguishable from fascists. Those fighting popular struggles against dictatorship & repression are now maligned as terrorists by this so-called left when all along they were freedom fighters & little kids who just wanted to play.

Our sincere apologies to this little girl even if all apologies are pointless to her.