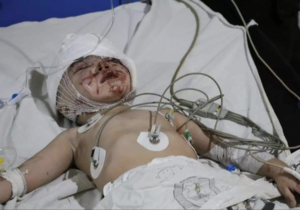 This tiny child is either Batoul or Ahmad, the only members of their family who survived the bombing of their home in Idlib. Their mom, dad, & newborn infant brother were killed. This little one probably hasn’t learned to talk yet so Assad officials will never be able to interrogate him to find out which ‘al-Qaeda affiliated Salafi-jihadi terrorist’ group he commanded. The corrupted antiwar & socialist movements have not uttered one peep of protest at the slaughter in Idlib because, citing from Stalin’s collected works–or is it Madeleine Albright in justifying the bombing of Iraq?–they consider this child’s unimaginable suffering as “worth it” to defend the Assad dictatorship’s right to self-determination.