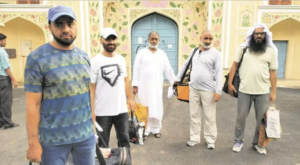 One doesn’t know whether to celebrate, to cry, or to be furious at the acquittal of six Kashmiri men & the release of five of them from an Indian prison after serving 23 years for a crime they did not commit. They were charged without evidence for multiple cases but were serving life without parole for planting a bomb on a bus near Samleti in the state of Rajasthan, India in May 1996. Fourteen people were killed & 39 injured in that bomb blast. They were acquitted Monday & released Tuesday when the prosecution could not produce any evidence of their involvement. What’s not clear from media reports is why the original charges filed in 1996 took 23 years to prosecute. We can only assume this miscarriage of justice, which stole the youth of several young men, is due solely to their being Kashmiris where Indian jurisprudence makes a mockery of justice.

Five of the released men, now in their forties & fifties, are Latif Ahmed Baja, Ali Bhatt, Mirza Nisar, Abdul Goni, Rayees Beg. The sixth person, Javed Khan, was acquitted in the Samleti bombing but remains in Tihar jail (where Kashmiri freedom fighter Maqbool Bhat was hung in 1984) still facing charges in another bomb case & probably with as little evidence. Although they did not know each other when arrested & it’s not certain were even political activists, the Indian government accused them of being associated with the Jammu Kashmir Liberation Front (JKLF) which was banned in March 2019 as a terrorist group–probably with as little evidence as they had for framing up these young men.

It must be extremely disorienting for the men after so many years in prison. Not only have they lost the memories of when members of their families died, married, been born, but the world has changed with cellphones, the internet, social media. Hopefully, when they recoup their psychic energies from being warmly received in Kashmir by family & friends, they will be able to tell their stories so that we can understand the character of Indian injustice in the incarceration, torture, indefinite detainment without charges, disappearance of thousands of Kashmiris whether or not they are involved in political resistance.

Welcome home to our Kashmiri brothers. May your transition be made smooth. Kashmir remains under occupation, so it will not be a transition to freedom yet.