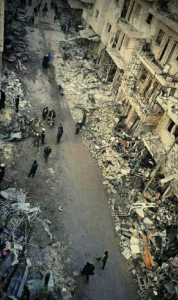 Behold the ‘liberation’ of Idlib by Syrian & Russian bombers which have turned heavily populated cities into dead zones to defend the Assad dictatorship’s right to self-determination. Nihilism has become the ideological stance of all who defend this as liberation. Sectarians have found their natural habitat in Stalinism & Stalinism has found its final rotting place in fascism.

How to unravel the complexities of the Syrian revolution? Those civilians being bombed to death for rising up against dictatorship are the oppressed & those doing the bombing are the oppressors, including Syria, Russia, the US-coalition, & Iran.

Stop the slaughter in Idlib. All foreign military forces & mercenaries out of Syria.

(Photo is unverified screenshot of video from Ben Tro on Twitter)