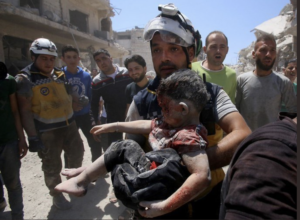 UN officials report that yesterday at least 39 people, including eight women & five children, were killed in Syrian & Russian bombing of the busy marketplace in Maarat al-Numan, Idlib. That death toll is expected to rise as bodies continue to be recovered from the rubble. According to witnesses, some of the bodies were shredded or burnt beyond recognition. The death toll yesterday for all of Idlib, including bombing attacks on Khan Sheikhoun & Maar Shoreen, was at least 59 people killed & more than 100 injured, many of them critically.

Here a White Helmet rescuer carries a child injured yesterday by Syrian & Russian bombing of Idlib. Assad propagandists would call this photo staged & the child a ‘crisis actor’. The corrupted antiwar & socialist movements would say this slaughter is necessary & “worth it” to defend the Assad dictatorship’s right to self-determination. Principled antiwar activists call this a genocide & oppose it with every fiber of their being.