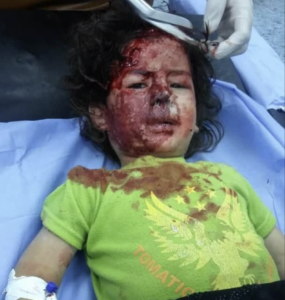 This little girl just survived (albeit with considerable physical & psychological trauma) heavy shelling by Syrian forces on civilian neighborhoods in Khan Shaykhoun, Idlib. When she is recovered enough to understand, we are certain she will agree with the corrupt antiwar & socialist movements that her trauma was, as Madeleine Albright would put it, “worth it” to defend the Assad dictatorship’s right to self-determination.