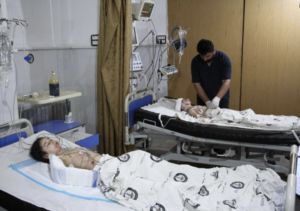 These little boys named Batoul & Ahmad are the only members of their family who survived Syrian & Russian bombing of Idlib yesterday. The bodies of their mother, father, & newborn baby brother were recovered from the rubble late last night by White Helmet rescue workers.

The Assad dictatorship, its propagandists & guppies continue to denounce these little guys, their family, neighbors, & the White Helmets as “Salafi-jihadi terrorists.” But they are civilians, just two little boys, not terrorists.

May the deceased Rest In Peace. Stop the bombing of Idlib. Stop the slaughter.