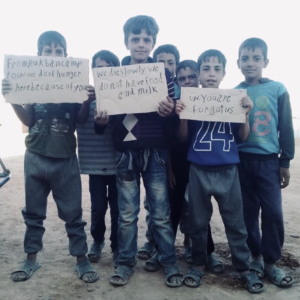 These are children from the Rukban refugee camp which lies in an isolated area within the demilitarized zone between Jordan & Syria. Since 2014, it has been inhabited by more than 60,000 refugees displaced by bombing in other areas of Syria. Starting in June 2018, the Assad regime began implementing a siege & blockade of the camp, including closing all roads leading to the camp to prevent the entry of medical & food supplies. There is almost no medical care & starvation prevails.

Russia & Syria have opened two corridors to force camp residents to relocate to their home towns in regime-controlled areas but most are refusing despite the dire & deteriorating conditions because of fear for their safety. The Assad regime is trying to force residents to regime-help areas by tightening the blockade but they continue to resist & want instead to go to the opposition bastion in Idlib now under aerial bombardment by Russian & Syrian warplanes. Imagine being forced to make the choice of a war zone over a dictatorship which arrests, tortures, disappears, murders. The few thousand who have left the camp have done so primarily because of concerns about their children’s health under the barbarous siege.

End the blockade of Rukban. Stop the bombing of Idlib. All foreign military forces & mercenaries out of Syria.