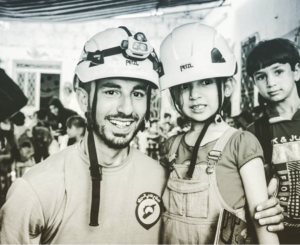 We should take a moment to honor “Anas Al-dyab” (a nom de guerre), a volunteer & media activist with the White Helmet rescue workers who was hit in three Russian air strikes this morning while documenting the bombing of Khan Shaikhoun. Anas had been injured several times previously in his years of work with the White Helmets documenting Syrian & Russian war crimes & was one of three witnesses who testified about the chemical attack on the city of Khan Shaikhoun in April 2017.

May he Rest In Peace. Our sincere condolences to his family, friends, & the White Helmets who are mourning his loss.

(Photos of Anas from White Helmets)