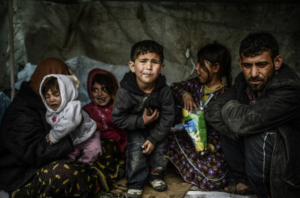 Over the past nearly five years, Turkey has sealed off its border with Syria & ordered its border guards to do massive pushbacks against refugees, injuring & killing many Syrians trying to cross. Between 2011 & May 2018, Turkey had registered nearly four million Syrian refugees, most of whom were attempting to cross from Turkey into Greece for asylum in other European countries. In 2016, Angela Merkel, as delegate for the European Union, brokered a €6 billion deal with Erdogan to prevent refugees from moving on to Europe. As part of that unsavory pact, the EU accepted Turkey sealing its borders with Syria to prevent refugees from crossing.

In July 2018, Turkey stopped registering Syrian asylum seekers, making thousands more undocumented & subjecting them to arrest, incarceration, & deportation back to a war zone. Turkish police increased checkpoints & raids, arresting Syrians without documents or permits to travel outside cities where they are registered. Turkish interior minister Süleyman Soylu told reporters, “We will not take responsibility for a wave of migration that may follow attacks in Idlib.” This is a serious violation of clearly spelled out international law prohibiting refoulement–forcibly deporting refugees back to war zones.

Now it’s reported that thousands of Syrian refugees deported back to Syria are being surveilled, arrested, falsely accused of connections to opposition militias, incarcerated, tortured, or disappeared by the Assad regime. Assad promised reconciliation to returning refugees but according to human rights activists, at least a thousand returnees who thought they’d reconciled with the regime have disappeared out of the estimated 4,000 who returned.

Photo is Syrian refugees in Istanbul from 2014 since there is almost no published photojournalism from the current crisis.