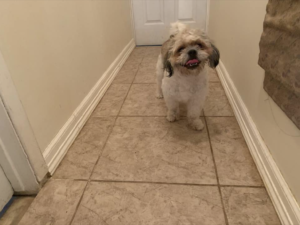 A few weeks ago, a woman, a retiree who lived in a trailer park, who I met at the dog park gave me a shih tzu dog she had found but couldn’t keep. Rather than her taking him to the shelter which euthanizes, I took him hoping the Yaqui animal shelter could find him a family. I named him Nacho until I could find his caretaker if he was lost or Yaqui could take him if he had been abandoned. If you hold on to a foundling for too long, the bonds become too deep & it’s impossible to give them over for adoption. Once they’re in your heart, they’re yours till death do you part.

The Dairy Queen ice cream shop here gives out free ‘pup cups’ to every dog if you buy something so every once in a while after the dog park I bring my crew to the DQ which they absolutely love. For at least a year, we’ve been waited on by the same young woman who is a dog lover & who always filled up each pup cup to the brim. Yesterday, my crew was due for a pup cup & she again was on the window. I told her my Miss Penny had died but that we had Nacho until we could find him a loving family through Yaqui. She said her aunt was looking for a dog just like Nacho & might be interested in taking him. I don’t trust my vetting judgement when it comes to adopting animals but after a year of interaction with this young woman, I trusted her as a person. So we agreed that I would give her the dog for her aunt & that if for any reason it didn’t work out, I would take Nacho back rather than have him passed around.

Later in the evening, I met her & her mom to relinquish Nacho. She reaffirmed that she would give him back to me if her aunt found him incompatible. This morning, she phoned to ask if she could keep him because her two boys fell in love with him, as she did, & that he slept in her bed curled up at her feet. She said whenever I bring my dogs for pup cups she would show me photos of the little guy so I can be assured of his happiness & well-being. You always worry yourself sick about dogs you turn over for adoption, that they found greater happiness & love. In this case, I feel certain that Nacho found a forever, loving home.