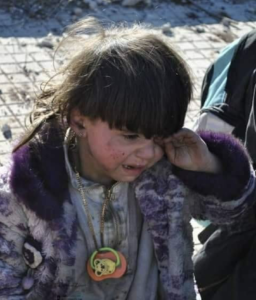 Assad propagandists produce one diatribe after another & go from one Assadist conference to the next denouncing mainstream media for biased coverage of Syria. A professional journalist doing a comprehensive analysis for Airwars concluded that US media coverage about harm done to civilians by US warplanes in its deployment against ISIS is practically nonexistent & that reporting by US media about the slaughter of Syrian civilians mainly covers the harm done by Syria & Russia. That’s a bias alright just like Assadist reporting that the only ones being bombed by Syria & Russia are terrorists.

The thing is that those who want to know exactly what is happening to civilians in Syria do not rely on US or European media at all but look to Syrian journalists & citizen journalists within Syria reporting on social media, on several Syrian human rights groups, including the Syrian Observatory for Human Rights, & on political groups like Action Group for Palestinians of Syria who are in or who have direct contact within Syria.

Most mainstream media does not appear to do its own on the ground investigations from Syria–anymore than it does in Afghanistan, Iraq, Yemen, Somalia, Yemen–but relies on information from Syrian human rights groups & independent journalists. War journalism, at least for the main media outlets, is becoming a thing of the past, especially since embedding journalists with the military is now their norm–a norm which compromises & outright corrupts journalism, turning it into propaganda, as we have seen not just with Bartlett, Beeley, Khalek, & Fisk, but also as we have seen with US journalists in Iraq & Afghanistan.

The lack of coverage in US & European media has facilitated the influence of Assad propagandists whose writings bear as little resemblance to journalism as romance novels do to love & allows them to claim there are no civilians in Syria, only “al-Qaeda affiliated Salafi-jihadi terrorists”. What matters to principled antiwar & human rights supporters is what is happening to civilians & rescue workers? How many have been displaced, made homeless, live in refugee camps, were forced into exile, injured, disappeared, tortured, killed–& what can we do to stand with them in opposing the slaughter?

Stop the bombing of Idlib! All foreign military forces & mercenaries out of Syria!

Article on the Airwars investigation: https://airwars.org/news-and-investigations/major-challenges-with-us-media-coverage-of-civilian-harm/?fbclid=IwAR1l2PTh3Lys1DqK_E-

(Photo is terrified Syrian child being evacuated from Homs in 2014)