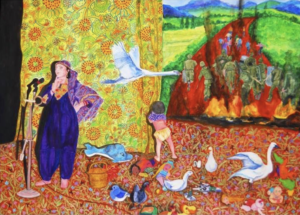 It’s worth reposting this beautiful tribute by Rollie Mukherjee to Kashmiri women’s leading role in the struggle for azaadi. Just a simple google search will show hundreds of photos of Kashmiri women protesting. They lead the Association of Parents of Disappeared Persons. They play a leading role internationally in the campaign against sexual violence in war, occupation, & genocide. They are central to one of the most important freedom struggles of our times.

“this painting titled “unframed ‘histories’” depicts a Kashmiri woman with a mike. She is not a mute beautiful showpiece as represented quite often. She is a reminder of the horror & wounds they are made to exist with. She is a speaking agency, speaking aloud to the whole world & thus breaks the patterned “way of seeing” of the Indians. The kashmiri design in this painting acts as a trope for peace & unity on the one hand & on the other hand sneer at how its beauty is relished & their pains are cornered & erased.”