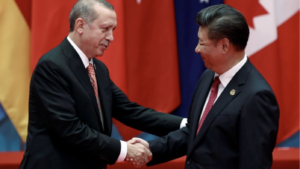 Turkish president Erdogan is a big talker when it comes to genocide, another master of the empty gesture. In 2015, an estimated 25,000 Rohingya refugees were turned away from asylum in Thailand & other countries & left to float in rickety boats in the Andaman Sea. Not a single navy sent a fleet to rescue them although Erdogan in one of his big-talking moments promised some Turkish naval boats. There’s no report that any Turkish boats ever showed up & still no accounting for the lives of thousands of Rohingya refugees. During the height of Burma’s 2017 genocidal assault on Rohingya Muslims in Arakan/Rakhine State–a genocide armed & politically supported by China–Erdogan did some more big talking & sent his wife for a media tour of Cox’s Bazar refugee camps. It’s not certain how much actual aid Turkey has ever delivered.

In February of this year, the Turkish government issued a statement calling China’s forcible “assimilation” & concentration camps for Uyghurs a “great shame for humanity.” On his recent state visit to China, Erdogan told Xi Jinping that Uyghurs are ‘living happily in Xinjiang’. Not even six months & our big talker goes from forcible assimilation in concentration camps to ‘living happily’ in concentration camps. What changed his mind? Realpolitik recognizes no principles, especially those of human rights. In truth, Erdogan heads a regime as repressive as the Chinese regime. His big talking does not express his commitments but the political expedience of the moment. Shame on his sorry ass.

(Photo of Erdogan meeting with Xi Jinping from SupChina)