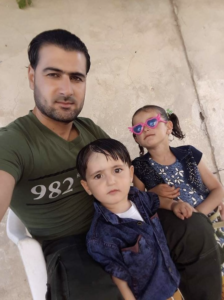 Amir & Tasnim Zakareya Hussein al Sayyed were killed yesterday along with their mom & dad by a Russian airstrike on Khan Sheikhoun, Idlib province. Authorities have not been able to identify which faction of “al-Qaeda affiliated Salafi-jihadi terrorists” the family belonged to because they were just civilians.