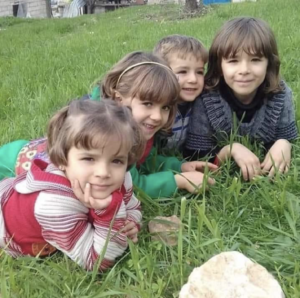 These four little kids who look like siblings were among the recently killed in Syrian & Russian bombing of the village of Mhambil in Idlib. That al-Qaeda is so devious. These four may look like little kids to us but the Assad dictatorship recognized them immediately as top commanders in the “al-Qaeda affiliated Salafi-jihadi terrorists” that Max Blumenthal, Ben Norton, Rania Khalek, & their unquestioning guppies constantly denounce.

Syrians in their village however are mourning their loss because they knew them to be just four little kids, not terrorists.

Stop the bombing of Idlib. They are civilians, not terrorists.