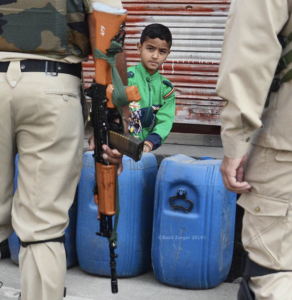 Scene from the occupation of Kashmir: another little boy grown old before his time from witnessing & being traumatized by the constant presence of violence.

This is the third anniversary of the murder of a Kashmiri militant by occupying forces. His name & image cannot be shown on FB without being suspended but his funeral prayers were attended by 600,000 Kashmiris. His murder set off months of massive protests against the occupation which the Indian army countered with extreme violence. By December 2016, 115 Kashmiris, including children were killed; 17,000 were injured, including 7,330 by pellets; 22 young people were totally blinded, 1,255 were partially blinded; 505 women were molested; 65,000 houses, shops, & other structures were damaged; 37 schools were torched; 9,700 people were arrested; 608 were arrested under the Public Safety Act allowing indefinite detention without charges.

This is an insightful article about the 2016 uprising written in November 2016 by Kashmiri writer Mirza Waheed: https://www.theguardian.com/world/2016/nov/08/india-crackdown-in-kashmir-is-this-worlds-first-mass-blinding?