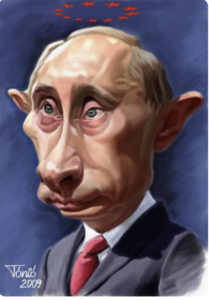 Not to be outdone in racism & xenophobia by Donald Trump or the Dalai Lama, Vladimir Putin sarcastically weighed in on the refugee crises in Europe: “The migrants can kill, plunder, & rape with impunity because their rights as migrants must be protected. The liberal idea has become obsolete.” Not to be outdone by Adolph Hitler, he defended Russia’s persecution of homosexuals, saying: “Traditional {family} values are more stable & more important for millions of people than this liberal idea” of homosexuality.

Russian intervention into US elections is small potatoes compared to his racism, Islamophobia, xenophobia regarding refugees or his homophobia. So would all those who mocked Russiagate & who defend Russian bombing in Syria care to explain or defend this monster’s views on refugees & homosexuals so arrogantly propounded just one week ago?

(Caricature of Putin by Tonio)