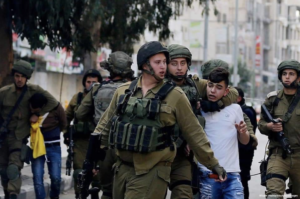 The growth of the Palestinian solidarity movement appears to be stagnating & there are several likely reasons for that. The escalation of threats against Palestinians–including declaring Jerusalem the capital of Israel, the ‘deal of the century’ scam, an acceleration of Israeli settlements & expropriations in the West Bank & genocidal violence against Gaza–make an analysis imperative of why the movement has stalled from 2014 when millions across the world marched to protest the bombing siege of Gaza.

One of the primary reasons is the association of prominent pro-Palestinian activists with Assadism, an ideology rooted in anti-Semitism (greater Israel rubbish) & Islamophobia. Because of their influence, people like Ali Abunimah, Max Blumenthal, Rania Khaled, Ben Norton & others have been able to disorient many & attract many others prone to hatred of Jews. But they have not confused Muslim, Arab, Jewish community groups who want no part of their ‘war on terror’ & international Jewish conspiracy rubbish. Their Assadism has deeply divided & immobilized, if not paralyzed Palestinian solidarity.

Another reason is the international Zionist campaign to outlaw BDS & make it a criminal offense to promote the economic & cultural boycott of Israel. But in a self-defeating loop, there is almost no organized opposition by Palestinian solidarity activists to these violations of freedom of speech & association which in the US directly impact & restrict the Bill of Rights.

Thirdly, those engaged in political organizing have observed for decades that every electoral cycle negatively impacts independent political action. Even at the height of the anti-Vietnam War movement, protests which normally drew hundreds of thousands, even millions, went down to tens of thousands. In the 2016 presidential campaign, Palestinian solidarity activities were preempted by lining up behind Bernie Sanders populism even though he was wretched on the 2014 bombing of Gaza. Sander’s 2020 campaign promises to be a repeat of that capitulation to false promises.

It’s very difficult to stand against the tide & attempt to organize events & rallies in defense of Palestinians but there has never been a more urgent time to do so since what the ‘deal of the century’ means to Palestinian self-determination is that Israel & its US, European, Indian, Middle East, & other allies are preparing the ‘final solution’ for Palestinians.

Photo is Israeli occupying army manhandling & arresting a Palestinian teenager in the West Bank in December 2017.