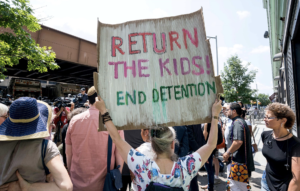 Amidst a public furor, Trump signed an executive order (which has the force of law) in June 2018 to end his ‘zero tolerance’ policy, stop kidnapping children from their refugee parents, & reunite 3,000 kidnapped children with their parents. So why, by their own admission, are his officials still kidnapping children & stuffing them into concentration camps? Isn’t Trump breaking the law & shouldn’t Democrats, especially those running for 2020 president against him, be making a giant legislative & political stink about this? Or, as is more likely, do Democrats agree with Trump’s concentration camps?