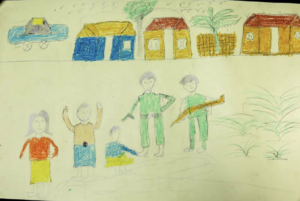 Rohingya children’s art: from 2018, when Rohingya refugee children in Cox’s Bazar drew their experience of the genocide. They drew images of soldiers with guns & death squads with machetes. In interviews with the children, it was learned 70-per cent had been separated from their parents or caretakers by violent acts, 63-per cent were separated during a direct assault on their village & 9-per cent were separated as their family tried to flee the genocide. There are at least 6,000 unaccompanied children living in the refugee camps.