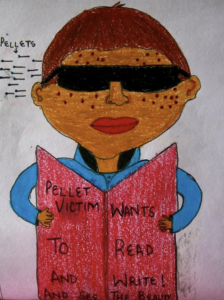 Kashmiri children’s art: from 2017, when children were processing the extreme violence used, especially with pellet guns, against unarmed protesters in an uprising against the occupation & the murder of a man whose funeral prayers were attended by 600,000 Kashmiris but whose name & image cannot be shown on FB without being censored & suspended.