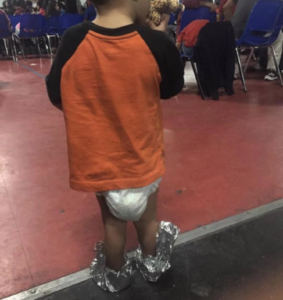 A group of volunteers from the San Francisco area came to McAllen, Texas, a main crossing point for refugees where there is a concentration camp for children. They posted this photo from the Catholic Charities center of a child just released from the concentration camp. This little one has no shoes & a dirty diaper that looks like it hasn’t been changed for days. The group members reported that most of the kids did not have shoes.

The lawyer team that recently visited the camps reported they saw children who were unresponsive, feverish, vomiting. One 2-year-old was completely unresponsive & limp & her eyes were rolled back in her head. None were receiving medical care. How is torturing small children in such monstrous ways not the ethos of Auschwitz?

So far, the main immigration rights group here, which receives substantial monies through the Democratic Party, has not held any rallies at the local concentration camp but only a one-hour after dark prayer vigil for those who have died.

(Photo from Belinda Arriaga, a USF professor who was part of the volunteer group)