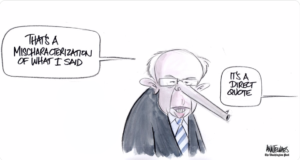 Socialist supporters of Sanders are attempting to malign those who think him a populist windbag as anti-Semitic & are posting this cartoon by Washington Post cartoonist Ann Telnaes as evidence. Apparently they don’t know that noses play a dominating role in caricature, not just in hateful ones toward Jews, Arabs, & Blacks. This is clearly a reference to Pinocchio & to Sander’s dissembling response to a question on gun control during the recent Democratic candidates debate. That’s why his Pinocchio nose is drawn like a rifle.

Is that the best they can to justify campaigning for a Democrat? We’re gonna see them go a lot lower. Why don’t they just go full monty Democrat & get it over with?