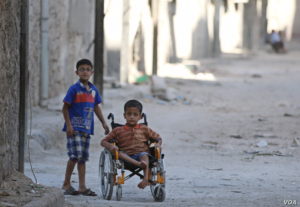 The Syrian Network for Human Rights (SNHR) reports that Syrian & Russian bombers in Idlib are targeting schools along with hospitals, homes, & crops. As of yesterday 77 schools & 30 hospitals have been bombed. An estimated 43,000 children have been forced out of school, the education of 400,000 affected.

The crisis also affects Syrian refugee children. Just in Turkey, 1,047,000 Syrian refugees are school age children. According to data from the Turkish Ministry of Education, only 643,000 of them are registered in school; 403,000 are not getting educations, at least outside the home.

Parents are consoled however knowing their children’s educations & futures were destroyed to protect the Assad dictatorships’ right to self-determination, according to the corrupted antiwar & socialist movements.