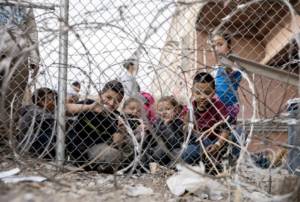 The US House of Representatives (dominated by Democrats) & the US Senate passed the ‘Emergency Supplemental Appropriations for Humanitarian Assistance & Security at the Southern Border Act’ giving the Trump administration $4.6 billion for policing the border & maintaining the concentration camps. Democrats put no obstacles in the way of the border patrol arresting, abusing, & torturing children on Trump’s orders.

Given their populist rhetoric, one would think Democrats would make sure most of that $4.6 billion would go for humane housing, food, water, sanitation, psychological services, toothbrushes, soap, blankets & beds, & for getting little kids out of those concentration camps. But in fact, $1,426,358,000 goes to the Pentagon (including the Marines & US Air Force), Border Patrol, Homeland Security, Texas National Guard, & judges to deal with “the significant rise in aliens at the southwest border.”

The Department of Health & Human Services, which is setting up but not overseeing the concentration camps, was allocated $2,881,552,000 for ‘refugee & entrant assistance’. Lest we think there’s any humanitarian concern involved, $708 million of that is for setting up more concentration camps & for outsourcing the children to private providers, $160.5 million is for paying overtime to the concentration camp guards & for computer services; $36 million is for transporting “alien” children to court or relocating them to another facility; $21 million is to Homeland Security to investigate human trafficking. Out of the $4.6 billion, nearly $2.9 billion for ‘refugee assistance’, less than $112 million is allocated for “consumables & medical care” for children whose conditions in the camps rival Auschwitz.

The Democrats must be in complete accord with Republicans in setting up the concentration camps because not only is most of the $4.6 for maintaining concentration camps, but they made no provisions within this appropriations bill for oversight of Trump & his immigration minions. There is no way they will be able to determine if Trump officials allocate the money to the wall, use it to pay overtime to prison guards or bribe judges, or outright steal it.
We’d like to ask the Democratic senators running for president in 2020 exactly where they stand on this bill. We’d like to know what they think about referring to small children as “aliens.” Mostly, we’d like to know what they intend to do to organize opposition to those concentration camps other than blow puffballs of populist rhetoric.