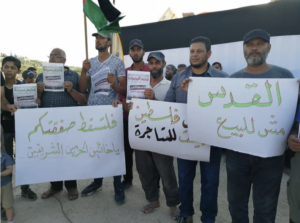 Palestinian & Arab sources who have been briefed about the Kushner/Trump “deal of the century” say it has abandoned all pretenses about a two-state solution. That is certainly no surprise since that is the logic of the Oslo Accords. If Mahmoud Abbas & the Palestinian Authority are resistant to the new deal, it is only because any further need for their services to Israel would become obviated. They were installed to implement & enforce the provisions of the Oslo Accords which legitimized the occupation & expropriation of Palestine.

It’s not a bad thing that delusions about a bantustate solution are shattered. What’s threatening is that the US & Europe are signaling their intent to accelerate Israel’s colonization, apartheid, genocide & ethnic cleansing of Palestinians. That is a clarion call to educate about the importance of & build BDS & to build a consistent, massive, public movement in solidarity with Palestinian self-determination & political power. The one-state solution that would come out of this deal would be a racist, Jewish-only apartheid state. That puts the proposal of Palestinian visionaries back up front where it belongs: a democratic, secular state where Palestinians & Jews would be equal & learn to live with each other as brothers & sisters.

Photo is Palestinian refugees in Syria protesting the Kushner/Trump deal which would preclude them from ever returning to their homeland.

(Photo from Action Group for Palestinians of Syria)