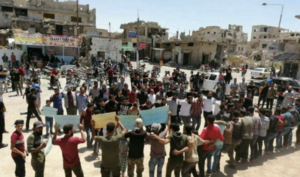 The Syrian Arab Spring is nothing if not tenacious. It has been battered as ferociously as the Yemen Arab Spring by massive military assaults from several governments–so threatening is the prospect of democracy in the Middle East.

In the midst of a several week Syrian & Russian carpet bombing siege over Idlib & Hama in northern Syria, Arab Spring activists in the southern city of Dara’a poured into the streets after prayers last Friday with placards & banners expressing solidarity with the people of Idlib & Hama & demanding the release of detainees held in Assad’s gulag. Their placards read “Oh Idlib & Hama, Dara’a is with you until death” & payed tribute to Abdul al-Sarout whom Assadists are maligning as a terrorist. This is one of several Arab Spring protests in Dara’a in recent weeks which is extremely courageous & determined considering that Syrian & Russian ferocity in Idlib & Hama is directed most aggressively against those towns most active in the Arab Spring.

Stop the bombing in Idlib & Hama. Solidarity with the activists in Dara’a.