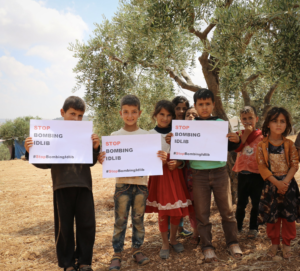 There are new reports that Syria & Russia are using white phosphorous in bombing Idlib. The US State Department said several weeks ago it had received numerous reports about chemical bombing in Idlib but had ‘made no definitive conclusion’. The US is in no position to be condemnatory since it used white phosphorous in its 2017 bombing siege of Raqqa which wiped out entire families & turned the city into a wasteland of bombed-out concrete. It also routinely used it in Iraq (including Mosul in 2017), Afghanistan, & bankrolls Israel which uses it in Gaza. This new report came from Daily Sabah, a conservative Turkish daily often called a propaganda outlet for the Turkish government. They published video footage of Syrian warplanes dropping 18 phosphorus bombs on the town of Khan Shaykhun, Idlib. The White Helmet rescue workers have reported similarly going back to April when the Idlib siege began.

Assad propagandists & their guppies will immediately leap to a defense of Assad, mocking the sources of the reports & making long juridical arguments about how Assad has no need to use chemical weapons since he is winning the war. (Their tacit defense is that he’s a snazzy dresser who looks European, not Arab, & wouldn’t do such a thing.) When you ask why Syria & Russia are bombing hospitals where chemical exposure could be definitively proven or disproven, Assadists claim they were not medical facilities at all but depots where ‘al-Qaeda affiliated Salafi jihadi terrorists’ hole up & store weapons. They have an answer for everything because Assad pays them well for sowing confusion & distrust. Nihilism is the nature of fascism & Assad’s propagandists have made it an art form of the Leni Riefenstahl kind. Truth is, one of the main reasons that Syrian & Russian bombers target hospitals is to exclude the possibility that medical personnel could confirm & document that those treated showed symptoms consistent with chemical exposure.

Since Syria & Russia are carpet bombing Idlib, one can ask whether chemical weapons are a more gruesome way to die than the barrel bombs (oil drums filled with shrapnel & explosives) they’re also using. Being bombed & burned to death is a hellish, unimaginable way to die but survivors of such weapons sustain deep, disfiguring, disabling burns, eye & respiratory infections, gastrointestinal irritation, organ damage to liver, kidney, heart, lung, or bones.

Principled antiwar activists would not be running interference for the Syrian & Russian air forces. They would be in the streets demanding, as these children of Idlib, that Syria & Russia stop the bombing.

(Photo of children in Idlib from Help Refugees on Twitter)