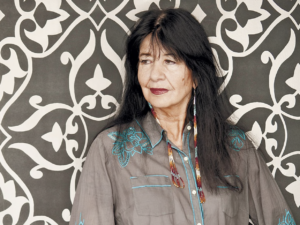 There’s a lot of hoopla over acclaimed poet & musician Joy Harjo being made the first Native American poet laureate of the US. What’s most memorable about her is that in 2012 she rejected appeals by Palestinians, Native American scholars, other performers, & a social media campaign to honor the cultural boycott & crossed the BDS picket line to perform at Tel Aviv University. An indigenous person, drawing from that experience, siding with colonialists rather than the indigenous occupied people of Palestine? She told an Israeli interviewer, “My poems are often used at births, deaths & weddings.” To which she can now add they are also used as a soundtrack to colonialism, apartheid, & genocide.

(Photo of Harjo in Tel Aviv, December 2012 by David Bachar)