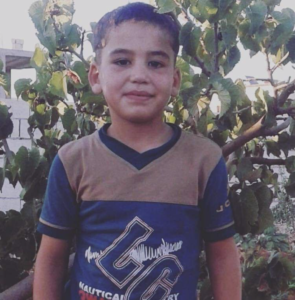 This little boy named Khaled Al-Dani was killed on Saturday in Syrian & Russian bombing of Saraqib, Idlib where his family lived. Four other members of his family were also killed.

It must be so heartening for his remaining family to know that while they grieve the unbearable loss, the shabby remnants of the antiwar movement are maligning their little boy as a terrorist who had to die to protect the Assad dictatorship’s right of self-determination.

The corrupted antiwar movement will limp through a few more years of pointless work like occupying that abandoned embassy & sending ‘peace delegations’ to dictators. “The dogs go on with their doggy lives.” But those who supported Assad & Syrian & Russian bombing of civilians will never be able to salvage the destruction they have wrought or the mockery they have made of antiwar principles. A principled antiwar movement must be rebuilt as the preeminent political responsibility of our generation.

May this little boy & his family members Rest In Peace.

(Photo of Khaled Al-Dani from Lina Shamy on Twitter)