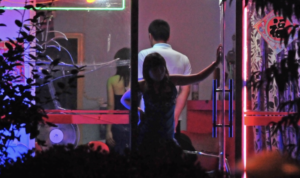 Under Chinese law, all forms of prostitution are illegal though only the prostitutes suffer any legal consequences. The johns, pimps, traffickers face no consequences at all for exploiting & commodifying women & children. The problem has significantly worsened since China transitioned from a planned to a market, sweatshop-based economy. Some kind of socialism that is!

China has almost 1.4 billion & India just over 1.3 billion people. India is hardly a bastion of female equality, but the prostitution revenues in China are estimated at $73 billion compared to $8.4 billion in India. That is not a measure of how much more the Chinese like sex nor is it a form of rebellion against the Maoist era crackdown on prostitution. It is a major symptom of social, economic, & political crisis in Chinese society. In so many ways, prostitution has jack-squat to do with sex & much more in common with rape, because trafficked children & teens are always at the center of it. China is a source, destination, & transit country for trafficked women & children. Until the issue of trafficking is adequately addressed, prosecuted, & punished, complete decriminalization of prostitution is an open invitation to victimizing millions of children.

Photo (from 2008) is a woman waiting for customers in the doorway of a barber shop in Beijing. Prostitutes work from bars, ply massage parlors, karaoke joints, & barber shops.