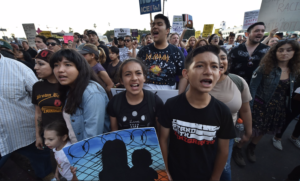 The governor of Texas just deployed 1,000 more National Guard troops to the border. Not child welfare specialists, not medical personnel, not social workers, not human rights investigators, but soldiers. He tweeted, which from him is more like guttural farting, that soldiers were needed because 45,000 people from 52 different countries were apprehended crossing the border in the past three weeks. What about the children, you ask? What about the thousands of refugee kids–estimated six months ago as over 15,000 but likely considerably higher–living in concentration camps? Do you get the distinct malodor of racism, nationalism, xenophobia, & white supremacy?

Photo from December 2018 is children protesting outside ICE concentration camp in LA.