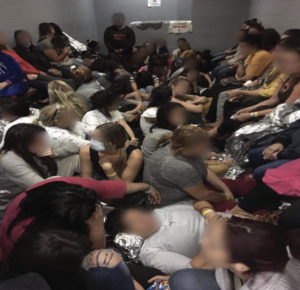 Last week, a team of lawyers visited some of Trump’s concentration camps for refugee children. The camps, which media refers to as “Border Patrol stations,” are federal facilities & in some kind of sweetheart deal between the state & federal governments, state child welfare investigators are not allowed to enter. The lawyers inspected the camps under provisions of the 1997 Flores settlement which the Trump regime is trying to overturn in court. The Flores settlement mandates the government to release children to their parents, other adult relatives or a licensed program within 20 days. It also mandates quality of life, including food, water, medical care in emergencies, toilets, sinks, temperature control, supervision & as much separation from unrelated adults as possible. Repeated reports of physical, emotional, & sexual abuse suggest that ‘unrelated adults’ have free access to the children even as child welfare investigators are barred by law.

The Flores agreement was named for Jenny Lisette Flores, a 15-year-old girl from El Salvador who in 1985 tried to enter the US to be with her aunt. She was arrested at the border, placed in a detention center, handcuffed & strip-searched. Immigration officials refused to grant her aunt custody. An ACLU class-action suit on behalf of Jenny & other minors led to the Flores settlement.

At the McAllen, Texas camp, one attorney reported all the kids she saw were very sick with high fevers, coughing, & wearing soiled clothes crusted with mucus & dirt. Fifteen kids at another concentration camp had the flu, another 10 were quarantined. “Everyone is sick. Everyone. They’re using their clothes to wipe mucus off the children, wipe vomit off the children. Most of the little children are not fully clothed,” she said.

All the lawyers are reporting that children are denied sufficient food or are eating frozen & rotten food. In violation of every standard of child welfare, concentration camp guards are leaving the care of infants & toddlers to little girls as young as eight. Others reported that children in the overcrowded, standing room only cages have no toothbrushes, no soap, no blankets, & are sleeping with aluminum foil covers on concrete or dirt floors in cages that are cold & have lights on 24/7. This week, as part of their attempts to get rid of the Flores settlement, Trump’s Justice Department lawyers made the case in federal court that refugee children do not need toothbrushes or soap.

This photo is El Paso Del Norte concentration camp which has a capacity of 125 but warehouses 900 children.