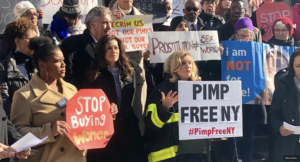 There are legislative initiatives in New York, Massachusetts, Maine, Rhode Island, Washington DC to completely decriminalize prostitution which means all laws restricting or punishing the sale & purchase of sex would be eliminated. These initiatives are not coming out of nowhere but are part of a growing international movement led by pimps & traffickers to remove all impediments against their industry although the initiatives are portrayed as led by prostitutes themselves.

The feminist movement has been divided on the issue of prostitution since the 1960s but after academic, middle-class feminists began in the 1980s promoting it as “sex work,” feminists who oppose its legitimization are vilified as sex-negative SWERFs & denounced as blue-nosed prudes. By promoting prostitution as consensual sex & just another way to earn a living far more lucrative & entrepreneurial than working in a factory, fast food joint, or office, they express their utter contempt for working class women since they would never suggest their own daughters choose prostitution as a career option.

To glorify prostitution as consensual sex is demeaning to women. Statistics show that 75-percent of prostitutes were victims of childhood sexual assault, a majority are addicted to drugs & alcohol, a majority are poor, declassed women who on a daily basis face extreme violence & danger. One can come up with any number of smarmy justifications for prostitution but it remains what it always was: the sexual exploitation & commodification of poor women & children.

Prostitution turns women’s & children’s bodies into products like soy beans or pork rinds. That those who call themselves socialists would promote prostitution is an abomination. Feminists who oppose prostitution are accused of being anti-sexual moralists when the truth is we answer to higher aspirations for women & children. We are not cynics & will never accept prostitution as an ineradicable social institution. It is not the ‘oldest profession’ for women but came after women had developed agriculture & with the emergence of patriarchy.

The Nordic Model is the alternative to complete decriminalization. It would not legally penalize women for selling their bodies but it would come down like a hammer on johns, pimps, traffickers, brothel owners. Those proposing complete decriminalization attempt to portray blue-nosed feminists as the promoters of the Nordic Model. In fact, in every place where there is opposition, it is led by alliances of political organizations, unions, NGOs, feminists, human rights advocates, rape crisis centers, child protection groups, nurses & midwives, anti-human trafficking groups. It is led by those who want to protect women & children against exploitation, provide services for recovery & opportunities for a dignified livelihood. That does not patronize prostitutes but acknowledges the dehumanizing realities of exploitation & commodification.

Photo is March 2019 protest in NYC led by the National Organization for Women against decriminalizing prostitution.