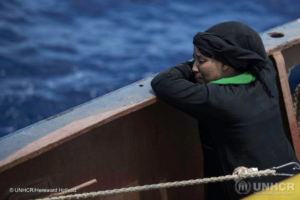 Every June 20th is World Refugee Day, designated as such in 2000 by the 193 member nations of the UN General Assembly. There probably is no greater mockery of refugee rights than this ceremonial pity-party because a majority of those 193 nations have created the millions of refugees from every continent by their economic, social, & political policies. Rather than use their considerable resources to provide asylum & services to refugees, the 193 member nations are refusing them entry, assaulting & arresting them, forcibly deporting them, vilifying them as terrorists, criminals, rapists, allowing them to drown, prosecuting those who provide humanitarian assistance, stuffing them into concentration camps, physically, emotionally, sexually assaulting them, trafficking the women & children.

The refugee crises today as a result of war, neoliberal plunder, military occupation, genocide, are a touchstone for the political ethos of our times. Either we organize internationally in defense of immigration & refugee rights or we capitulate to the dark forces of social hatred, racism, nationalism, xenophobia. It’s our choice. To make World Refugee Day more than a pity-party, we must turn it into a day of protests to support refugee rights to asylum & all human rights.

Photo is a despondent African refugee in the Mediterranean.