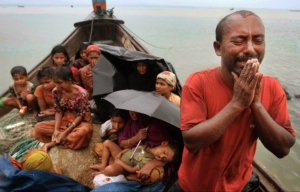 Before Global Research came out full monty fascist, it posted a May 2016 article written by me for Countercurrents on the Rohingya genocide. Global Research now openly endorses that genocide & I deeply regret & resent that they have not removed my article as contrary to their politics. I have never had any association with that piece of crap journal.

Aung San Suu Kyi took office as president (a civilian front for the military) in April 2016. This photo is from the Burmese army’s 2012 genocidal siege against the Rohingya. Tens of thousands fled for their lives to Bangladesh whose border guards, under the presidency of Sheikh Hasina, were turning them away by the boatloads. There are many wrenching photos from that event, like this one, showing Rohingya fathers pleading with the border guards to allow them entry.

The article from Countercurrents: