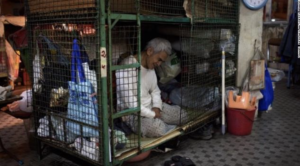 This is a post I wrote in 2014 about the squalid living conditions of thousands of working people in Hong Kong: underground cages whilst Hong Kong then had 50 billionaires & over 400,000 millionaires. But Max Blumenthal, Ali Abunimah, & Jonathan Cook scoff at the protests of millions of Chinese.

September 22, 2014
When Britain returned the colony of Hong Kong to China in 1997 it was under the policy of “one China, two systems”, meaning the economy of Hong Kong would remain capitalist & China would remain whatever the hell it is–a bastardized hybrid of sweatshop capitalism & state control. This arrangement would remain in effect until 2047. Capitalism under British colonialism was thriving in Hong Kong since in general & contrary to propaganda, tyranny best suits capitalism. None other than Milton Friedman, the simple-minded troll who shilled the most barbaric, antisocial forms of capitalism, thought it represented the apex of capitalist achievement. He claimed, after walking the streets of Hong Kong for a few hours, that there were no exploited workers in Hong Kong. It was a worker’s paradise even if they would be thrown into jail for trying to form a union.

One of the things that should have made the transition a seamless one from the political system of British colonialism to “one China, two systems” is that neither British colonialism nor China were democratic. So certainly out of the malevolence Britain exercised in exiting all its colonies, it sent one of it’s hapless ne’er-do-well politicians to begin reforms easing colonial rule a few years before the formal transition of sovereignty in 1997. One of the reforms was setting up an elective legislature which was really a provocation to China more than a reform because it was likely calculated to encourage anti-communist politicians to pose problems for China especially after the massacre of Tiananmen Square in 1989. The cordiality of the transition was only apparent.

Unsatisfactory explanations are given for why Britain turned sovereignty back to China. Some say it’s because Britain’s 99-year lease on the island ran out. British colonialism isn’t known for its adherence to law, let alone rental agreements. Hong Kong was a colonial enclave known as “the gateway to the West for China’s trade.” It’s wealth was derived from handling billions of dollars in Chinese exports & trade. The withdrawal agreement was masterminded (in 1984) by the British government under Thatcher in collaboration with British & Hong Kong capitalists & China to the economic advantage of both countries. British capitalists could continue to make billions without sustaining the burden of colonial administration.

The current conflict started this past summer when the Chinese government began to backtrack on peaceful coexistence with democratic rights in Hong Kong. Originally, the two countries had concocted Hong Kong Basic Law which included freedom of speech, assembly, press, religion, & the rights to form unions & strike. It also included a pledge of universal suffrage by 2017 for electing the Chief Executive of Hong Kong (a mayoral position replacing the British governor). But in late August, the Chinese authorities laid out proposed electoral procedures which are a one-act farce called “Their Universal Suffrage & Ours” where they control who is elected by strangling the nomination process. After so many years of machinations & deceits around that damn sovereignty, the Chinese government probably thought it could pull off another fast one.

The proposed election procedures are not unlike the US system: candidates for chief executive would not be by popular nomination or political party but by a government nominating committee. It only differs from the US system in that in that the US has two nominating committees posing as two parties–the Democrats & the Republicans. But in both cases, the elections are rigged so that corporate interests always win & there is no possibility for dissident voices to enter the system. The new procedures actually differ little from the present one in Hong Kong where a committee of 1,200 corporate elite choose the chief executive. Capitalism in Hong Kong doesn’t like to beat around the bush or even tip its hat to democracy but now the massive democracy movement is forcing that to change.

One of the primary things driving the democracy movement is the immense disparity between tycoons & working people in Hong Kong. It’s a small place but Hong Kong has 50 billionaires & an estimated 400,000 millionaires–out of a population of 7 million people. It also has nearly 1.5 million people living below the official poverty line set by the World Bank at US $1.25 a day (based on the cost of living in 1,000 BCE). One reason the troll Milton Friedman admired it so much is that it has almost no social security system; only 14% of people over 60 years-old get any social security so in order to eat they have to keep working into old age. The place is apparently distinguished by the number of indigent elderly people employed at menial labor for only a few hundreds bucks a month.

The miniumum wage in Hong Kong is US $3.87 or £2.40 an hour. That’s 75 cents more than the cost of a quart of milk. An average one-bedroom apartment costs US $1,446. That’s why there are nearly half a million people in Hong Kong waiting for public housing on a waiting list that’s ten years long. And while they’re waiting they live in “coffin homes” or cage homes which are like chicken coops layered on top of each other under the cities multi-million dollar skyscrapers, luxury apartments & chic shopping malls. These chicken coops don’t go cheap; the average is about US $175 a month, which is more than one weeks wage. In short, it’s everything that’s damning about capitalism. Not to mention everything that’s damning about China.

Activists in Hong Kong’s large democratic movement pledged a campaign of civil disobedience to paralyze the central financial district–the jugular of the place. Like every social movement, Hong Kong democracy activists are divided by those with relatively short-sighted demands & those with far broader reform goals. A section of the movement called “Occupy Central with Love & Peace” calls primarily for universal suffrage. That section is massive, including many students, but has a rather equivocal leadership who appear reluctant to go the distance by shutting down business in Hong Kong. But there are many other organizations involved. For many years the political movement there has been impressive & massive in demanding justice for Tiananmen Square; in honoring Chinese labor organizer & dissident Li Wangyang who served 20 years in jail for political activity; in supporting Edward Snowden; in demanding democratic rights. Our fullest solidarity with their movement.

Photo is of 78-year-old Tam Wing Dik who lives in this cage home.