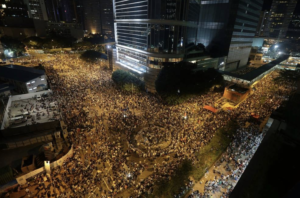 Since influential creeps like Max Blumenthal & Jonathan Cook are casting aspersions & contempt at the Hong Kong protests involving at least seven-million Chinese, I am reposting two articles I wrote during the equally remarkable 2014 protests in Hong Kong.

September 30, 2014
One of the most famous & regrettable quotes of Mao Zedong comes from a speech he gave to the leadership of the Chinese Communist Party in 1938: “Political power grows out of the barrel of a gun.” He went on to say: “All things grow out of the barrel of a gun. According to the Marxist theory of the state, the army is the chief component of state power.” And again: “In this sense we may say that only with guns can the whole world be transformed.” You gotta ask yourself where the hell Mao learned his Marxism. But we sure now know where the current Chinese regime learned theirs.

There have been several days now of spectacular, massive protests in Hong Kong over the democratic right of suffrage; that is, residents of Hong Kong want Beijing to drop its schemes to control elections in Hong Kong in order to install the same kind of politics they maintain on the mainland where one party backed by a mighty army determines who’s in charge & there is no electoral democracy.

Those in countries where parliamentary democracy prevails well know that popular democracy does not grow out of elections. More & more, elections are jockeying over figures from competing parties with identical politics or political programs only distinguished from bad to worse. More & more, we see maneuvers using elections to outsmart popular demands for democracy & the end of tyranny (as against the Egyptian uprising). More & more elections are a swindle because in one way or another the nominating process is controlled & election laws so prohibitive that only millionaires can afford to run. In most countries people tolerate this outrage & express their cynicism by boycotting elections & becoming politically passive. In Hong Kong, the democracy movement is taking a stand against these electoral manipulations & represents a fight for genuine electoral democracy.

Hundreds of thousands in Hong Kong are protesting China’s proposed electoral scam & will be doing so at the ceremony tomorrow marking the 65th anniversary of the founding of the People’s Republic of China. Protesters are occupying government buildings & the central business district of Hong Kong blocking traffic & closing down banks & businesses. That business district is where billions of dollars in Chinese trade & commerce transpires.

This year is also the 25th anniversary of the Tiananmen Square massacre which the active democracy movement in Hong Kong commemorates with annual protests demanding justice for those murdered & incarcerated. Tiananmen was an event where the Chinese regime tried to demonstrate Mao’s assertion that “political power grows out of the barrel of a gun.” The annual protests are held to counter that repugnant assertion with a demand for accountability by the regime for its crimes in Tiananmen.

There have been concerns expressed that China would in fact sic the army on Hong Kong protesters. Such an option can never be excluded but China would have hell to pay if it took that route. The stench & stigma of the Tiananmen massacre still has not politically dissipated. For now, Hong Kong riot cops are using extreme violence against protesters, including indiscriminate use of tear gas. Protesters, familiar with police brutality prepared for that eventuality with training exercises in how to handle tear gas attacks. Many showed up dressed in plastic, makeshift gas masks, & other equipment & are using umbrellas they used for a rain storm to defend themselves against tear gas attacks.

In a very real way, the struggle for democracy in Hong Kong is a struggle for the soul of socialism. If Mao is right that military repression is necessary for socialism, who in their right mind would want it!? If ‘only guns can transform the world’, who but criminal cartels & the National Rifle Association would want any part of it!? As the Hong Kong protesters show, as the Arab uprisings & anti-austerity protests & Occupy movement showed, social transformation is driven by the human demand for freedom & justice & peace. It is not political power that grows out of the barrel of a gun but tyranny.

Our fullest solidarity with our brothers & sisters in Hong Kong. May they shove those umbrellas where the sun don’t shine–up the keister of Chinese tyranny that still has Tiananmen to answer for.