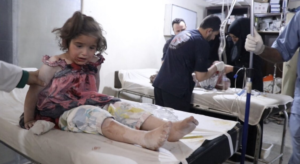 This small girl being treated in a field hospital is one of the lucky children who has, at least for now, survived the relentless barrel bombing of Syrian & Russian war planes over Idlib. We really hope the fat-headed socialists (like the ones from the cult Socialist Action) who support this bombing to defend ‘self-determination for the Assad dictatorship’ will send another delegation, like the one they sent to kiss Assad’s ass, to explain to these men, women, & children that bombing them to smithereens, killing tens of thousands of them, & forcing millions into exile is the price they have to pay for an antiwar & socialist movement that is in the final stages of terminal decay.

Stop the bombing. Stop the war on the Syrian Arab Spring uprising.