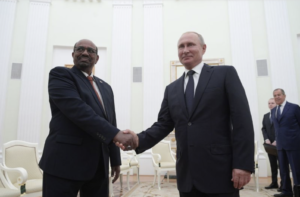 Assadists have been gloating over their interpretation that the Mueller report exonerates Putin from involvement in US elections. But anyway, Russian interference in rigged elections is hardly a central issue in world politics. The wars in Syria, Afghanistan, Iraq, Somalia, Yemen, & Libya are. The Uyghur & Rohingya genocide are. The struggles against occupation in Palestine & Kashmir are. The uprising in Sudan is. Unfortunately, the only thing any Assadists have had to say on these is to deny the Uyghur & Rohingya genocides & occupation of Kashmir & attribute them to ‘Wahhabi-Salafi jihadi terrorists.”

So we’d like Assadists to stop harping on Russian meddling in US elections, stop talking about the occupation of that abandoned embassy in DC, stop making Assange defense the epicenter of world politics, & make some judgements about Russian meddling in the Sudanese African Spring uprising. Since they ardently support Iranian & Russian military interference in Syria, including massive bombing, since they haven’t uttered a peep about the carnage in Idlib except to claim Syria & Russia are bombing ‘Salafi-jihadi terrorists’ because there are no civilians living in Idlib, do they support Russia continuing its mining operations in Sudan & above all, do they support Russia continuing to provide arms to the Sudanese military now murdering, raping, torturing democracy activists? Evasions don’t cut it. We want to hear your explanation for Russian military support to repressing & murdering Sudanese protesters. It’s gonna be a doozy.

Photo is ousted Sudanese dictator Omar Al-Bashir meeting with Putin in the Kremlin, in July 2018.