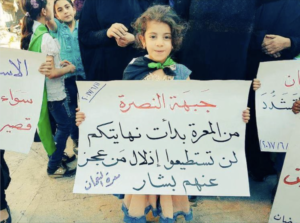 This photo from June 13th, 2017 FB archives is a little girl at a protest in the town of Maarat al-Nooman, Idlib province. The protesters who were participants in the Syrian Arab Spring uprising against the Assad dictatorship were protesting against al-Qaeda/Nusra terrorists operating in the region. Her placard reads: “O Jabhat al-Nusra. From Maarat al-Nooman your end has come. You cannot humiliate what Bashar al-Assad couldn’t.”

Can Assad propagandists or their guppies please explain to us what happened to those civilians & how it can be, as they claim, that Syrian & Russian bombers are only carpet bombing “al-Qaeda affiliated Salafi-jihadi terrorists,” not civilians?
Stop the bombing of Idlib, Hama, & Aleppo!

(Tweeted by Lina Shamy from Syria)