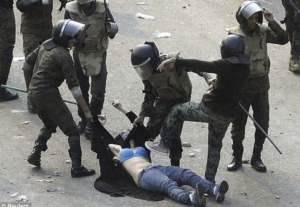 While the Sudanese military is using rape & murder to end the African Spring protests demanding democracy, we should remember that the Egyptian military, both under Mubarak & under Morsi, used rape, sexual assault, & murder against activists in Tahrir Square to destroy the Egyptian Arab Spring uprising.

This photo was taken in November 2011, months after Mubarak was forced to resign but while the military ruled directly in its own name. Mohamed Morsi, an elite member of the Muslim Brotherhood, was elected president in 2012 with the military using the same electoral apparatus it had used to get Mubarak repeatedly elected. It was at this time that many still considered the military as allies in the transformation to a democratic society. The ouster of Morsi in June 2013 & the resumption of direct military rule led to the present military dictatorship under General Sisi, including the massacre of hundreds of Muslim Brotherhood activists. Morsi is still in jail & although he was a tool of the military & not a champion of democracy, they have no right to hold him any more than they do tens of thousands of democracy activists.