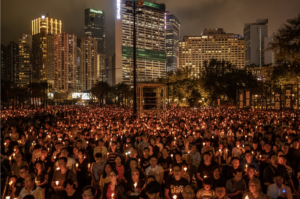 On June 4th, over 180,000 protesters gathered in Victoria Park, Hong Kong, as they gather every year, to commemorate the 30th anniversary of the Tiananmen Square massacre in 1989 & to recommit to the struggle for Chinese democracy. Tiananmen Square was a watershed moment in the Chinese struggle for democracy against a corrupt bureaucratic elite.

We would like the Maoists, Stalinists, & Assadists posting halfwitted vituperations denying the massacre ever took place (but adding that if it did, those rich kids protesting Chinese socialism deserved it), or posting articles from Unz Review (which collaborates with fascists & denies the Jewish holocaust of WWII) & postings from demented socialist cults like Freedom Road Socialist, to explain to us how these Chinese protesters have got it so wrong on Tiananmen Square but they have got it so right? We really want to hear their explanation so we can make chopped liver out of their contemptible apologetics for a massacre & mockery of Chinese political intelligence. The better to hang themselves with, my dear.