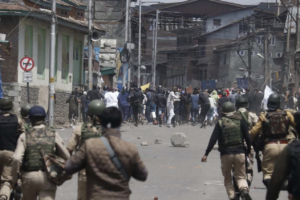 Under the Indian occupation, even religious festivals are not sacred because today after Eid prayers police used intense tear gas shelling, pellet guns, & stun grenades against unarmed civilians in Srinagar & other towns in the Baramulla, Kupwara, & Anantnag districts. There have been previous attacks during Eid in earlier years.

As Kashmiri police officials report it, Kashmiri youth came pouring out of the mosques & started pelting stones at security forces. Yeah right! What they don’t explain is what they were doing deployed outside mosques during the celebration of Eid when that is clearly a provocation & affront to religious freedom. The more likely scenario, as reported by Kashmiris present at the police attacks, is that civilians came out of Eid prayers & seeing the presence of troops started chanting anti-India & pro-azadi slogans which set off the security forces itching for a confrontation.

During the Srinagar confrontation today, Kashmiri youth were shown wearing that Guy Fawkes mask that has come to represent the rebellion of youth around the world against injustice. The mask is a good way to prevent getting fingered by police agents & hopefully will provide some measure of protection against pellet injuries to the face.

India out of Kashmir. End the occupation. Self-determination for Kashmir.

Photo is protest today in downtown Srinagar. Who’s the aggressor at this protest?

(Photo by Saide Zahoor Shah for The Kashmir Walla)