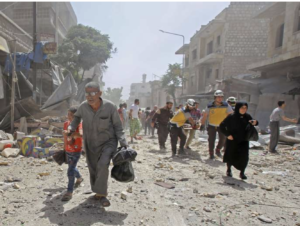 The town of Maraat Al-Nouman in Idlib Province has sustained massive regime & Russian bombing for years, including the repeated bombing of hospitals. This is the scene yesterday as Syrian & Russian warplanes swarm in for the final kill of the Syrian Arab Spring uprising. These civilians fleeing for their lives are what Assadists call “al-Qaeda affiliated Salafi-jihadist rebels.” Bartlett & Beeley reduce propaganda to farce when they call these civilians crisis actors trained to play dead on cue.