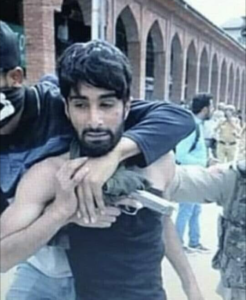 We should take a moment to pay tribute to this young man named Mehran Banday, the 22-year-old son of Mehraj Din Banday, who has died as a result of pellet injuries to the head sustained at a protest last year in Nowhatta, Srinagar. It isn’t clear from reports when he sustained the fatal injuries since there have been many protests in Nowhatta, including in June 2018 when Indian occupying forces ran over two young men & crushed 24-year-old Kaiser Ahmed to death with an armored vehicle. The June protest in Nowhatta was after Friday prayers during the Ramadan holy days. Like the Israeli occupying army at Al Aqsa Mosque in Jerusalem, the Indian occupying army makes mosques a target of their desecrations & assaults.

This photo is one of many of the arrest of Mehran by an undercover cop at a protest after Friday prayers outside Jamia Masjid in Nowhatta on September 7th, 2018. We don’t know if young Mehran was injured with pellet munitions that day or at another protest. The only account we have of the encounter is from the police who describe the incident as they do all of their aggressions against unarmed protesters. They claim they arrested four young men from a group of “miscreants” who pelted stones at soldiers deployed at the main gate of the mosque. But soldiers are regularly deployed at the mosque during Friday prayers only as a provocation & of course it angers worshippers as an aggressive violation of their religious rights.

May Mehran Banday & Kaiser Ahmed Rest In Peace. We honor them for their contributions to the struggle for Kashmiri freedom. Mehran’s body has been taken to Nowhatta for funeral prayers.