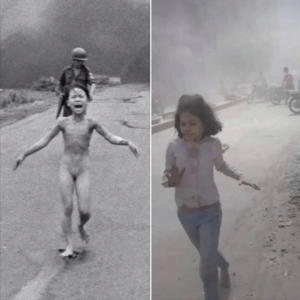 Phan Thi Kim Phuc (on the left) became known as “Napalm girl” from this 1972 photo of her & other children fleeing a US napalm attack in Vietnam. It is being rightly compared to the little Syrian girl (on the right) fleeing Syrian & Russian bombing in Idlib.

Stop the bombing! Stop the war against the Syrian Arab Spring uprising!