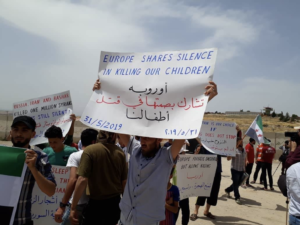 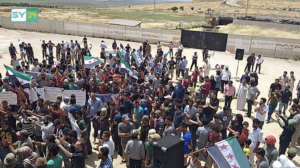 Syrian activists in Idlib province called an ‘Open the border” protest today at the Atmeh border crossing to Turkey to allow those fleeing Syrian & Russian bombing of Idlib & Hama to enter. Haid Haid, a Syrian research fellow in the UK tweeted that “the aim is not to illegally cross to Turkey” but “to highlight their need for protection & safe haven.” Actually, asylum for war refugees is international law. It is illegal to prevent them entering Turkey, not illegal for them to cross the border in flight from carpet bombing.

The placards at the protest clearly identified the EU as responsible for their plight since Erdogan signed an agreement with the EU to prevent Syrian refugees from entering Greece.

Open the damn borders! Immigration is a human right. Asylum for war refugees is international law.