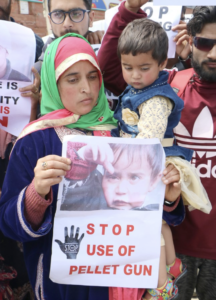 Kashmir’s youngest pellet gun victim Heeba Nisar with her mom Marsala at a recent protest against their use: Heeba was 19-months-old in November 2018 when Indian soldiers engaged in a hunt to kill operation fired tear gas canisters through the windows of the family home. As Marsala rushed out clasping the baby to escape the toxic smoke, Indian soldiers began firing pellet guns directly at them. Heeba immediately began crying in pain. She was rushed to hospital where the lead pellets were removed from her eye but it is still uncertain if she will recover her vision in that eye. During that military operation, one civilian was killed by Indian soldiers & 50 protesters were injured.